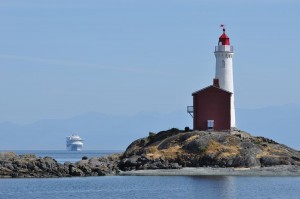 Located in Victoria Vancouver Island British Columbia, the Fisgard Lighthouse is the first lighthouse on the West Coast of Canada. Still on operation, it was built in 1860 by the British before Vancouver Island was even a part of Canada and has stood faithfully ever since, protecting sailors from the rocky coast and lighting their way into Esquimalt Harbor. Automated in 1929, this lighthouse hasn’t required a keeper since then however, many still come to visit this light and experience a part of history.

One legend claims that the stones and bricks which composed the lighthouse were actually ballast from Britain however, the real truth is that local brickyards and quarries were the source of the construction materials. Whatever the materials origin, the fact remains, that this lighthouse is one to be reckoned with. Still standing and still in good repair, the lighthouse is home to a number of exhibits and is still home base for the Royal Canadian Navy.

A part of the Fort Rodd Hill & Fisgard Lighthouse National Historic Sites, a trip to the lighthouse is just the beginning of what to explore. In addition, the Fort Rodd Hill historic site is also located here near to the entrance and offers a closer look at the military aspect of the area. A coastal artillery fort, Fort Rodd Hill was built in the late 1890’s to defend Victoria and the Esquimalt Naval Base. The fort includes gun batteries, underground magazines, command posts, guardhouses, barracks and searchlight emplacements. Along the way, interpretive information and guides can offer information about the history of the fort.

The area around the lighthouse has also become quite popular for Scuba diving, another interesting way to really see this part of Canada. Birdwatching touring, photographing, diving or just strolling through, this is one destitution worth visiting if you are in the area.

Tradewinds Vacations Club invites you to get to know more amazing areas for travel with us.